Arsenal claimed a 2-1 victory against QPR to maintain their top three position in the table after goals from Olivier Giroud and Alexis Sanchez.

With many of their rivals winning, it was imperative for the Gunners to maintain their lead and not lose ground in the race for the Champions League.

Here is how the Arsenal players rated against QPR.

Didn’t get a strong hand to Austin’s strike and made some nervy punches instead of catching the ball.

Continues his rise as Arsenal’s first choice full-back and defended against Hoillet well.

Didn’t look comfortable during his time on the pitch and struggled to handle Bobby Zamora. Went off before half-time with a muscle injury. 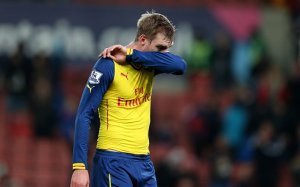 Looked back to his commanding self, winning his aerial duels and leading his back four.

One his personal battle with Matt Phillips but was at fault for the goal and a bizarre moment with the ball hitting his back almost giving Phillips a goal.