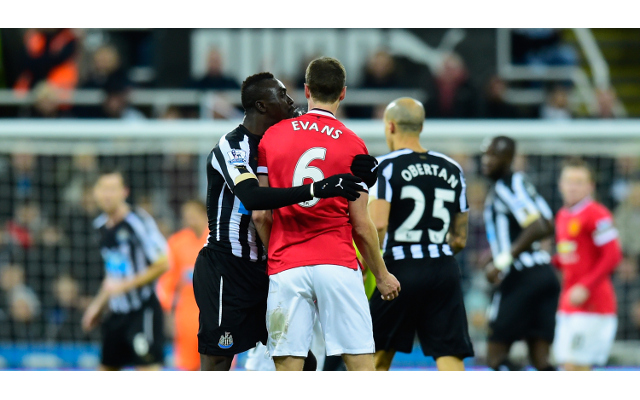 Hilarious that he’s even trying to deny it, there’s clear video footage Jonny!

SEE MORE:
Forget Spitting And Diving – THIS Is The Biggest Sin In Football
Louis Van Gaal May Break Man United Record For Worst Away Form
You’ll Never Believe Which Manchester United Had The Worst Passing Success Rate Against Newcastle…

Yes, despite the clear video footage of the incident, Evans has said he has been completely surprised by media coverage of the alleged spitting and wholeheartedly refutes any claims he did, reports Sky Sports.

However, that hasn’t gone down well in the world of social media, with fans taking to Twitter to, generally, just laugh at Evans trying to escape punishment by simply ignoring clear evidence of the event.

See the best below:

Perhaps Jonny Evans was spitting sarcastically – to show Papiss Cisse what he hadn’t done and would never do. That happens

He is aware there are tv cameras seeing him spit directly as Cisse isn’t he? #JonnyEvans #ManUtd

You’ve got Cisse admitting what he did was wrong and Jonny Evans thinking we are all blind and stupid… This is great. I love statements.

Jonny Evans should get a 5 match ban for spitting, another 5 for denying it, and another 5 for being a simply atrocious defender.