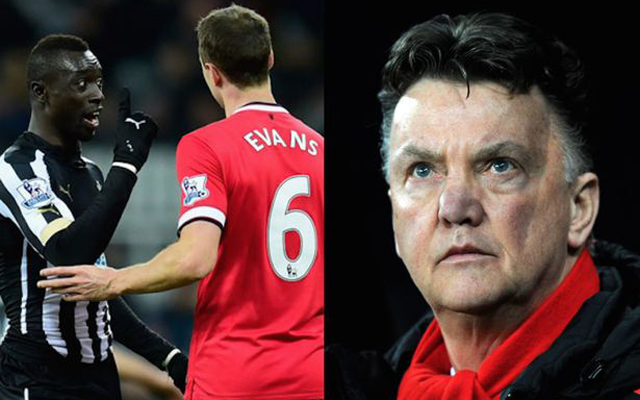 Manchester United manager Louis van Gaal has spoken out in support of centre back Jonny Evans, following his clash with Newcastle United striker Papiss Cisse. The pair appeared to spit at each other on Wednesday during United’s 1-0 win.

The FA today charged both players over the incident, with Cisse already accepting his seven-game ban. However, Van Gaal has been quick to try and talk down the officials, claiming that Evans was not to blame.

“I think the FA is very wise,” Van Gaal smiled, as he brushed off a series of questions in a way Sir Alex Ferguson would have been proud of.

The Dutchman, who was quoted by the Sun, continued: “Of course I’ve spoken with Jonny Evans. It’s like what I said in the Press conference after the match, he was not aware he was spitting. When he was spitting it was on the ground and that, maybe, is a natural thing from a human being.”

Van Gaal is no doubt desperate to avoid losing such a key player for an extended period of time, as his side attempt to fight off Liverpool, Southampton and Tottenham Hotspur for a top four place.

He added: “I think it was not his intention — and that I’ve said already. And I cannot imagine that Jonny Evans could do that. He has said that also so I believe him. So for me the matter is done. With the other player (Cisse) it is not my problem.”