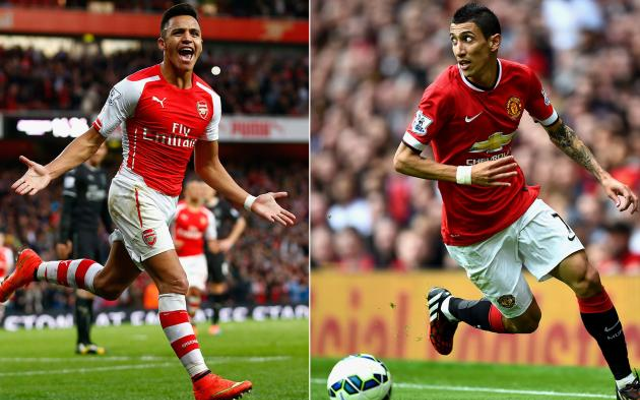 Ex-Arsenal star Ray Parlour won four FA Cups during his time in north London, and believes there are two players who will decide the tie on Monday…

Arsenal legend Ray Parlour has backed the FA Cup tie between his old side and Manchester United at Old Trafford to be decided by either Alexis Sanchez or Angel Di Maria.

The two wingers have endured different seasons this campaign, with Alexis taking the Premier League by storm and scoring 19 goals in all competitions for the Gunners, whilst Di Maria has struggled after a decent start to his Man United career.

However, the quality of both players is evident and Parlour believes both Louis van Gaal and Arsene Wenger should be looking use both their South American stars.

“Wenger should tell the guys to soak up pressure, break quickly and make the most of the pace of Danny Welbeck and Alexis Sanchez,” Parlour told the Evening Standard.

He also feels the criticism of Di Maria has been harsh, with the winger’s impact during his first season in England inevitable.

“Di Maria’s body language against Newcastle just looked wrong, like there was something wrong there. I think he’s still adapting to English football. He came here and started on a real high but he might have been shocked by the intensity,” he continued.

“It’s so different to Spain, where Real Madrid can play the bottom sides and rest four or five players. Here there are no easy games. But Di Maria is a quality player, sooner or later he’ll come good.”

Despite the plethora of options available to both managers, Alexis and Di Maria might just step up on the big occasion and deliver a performance to match their price tag and profile.