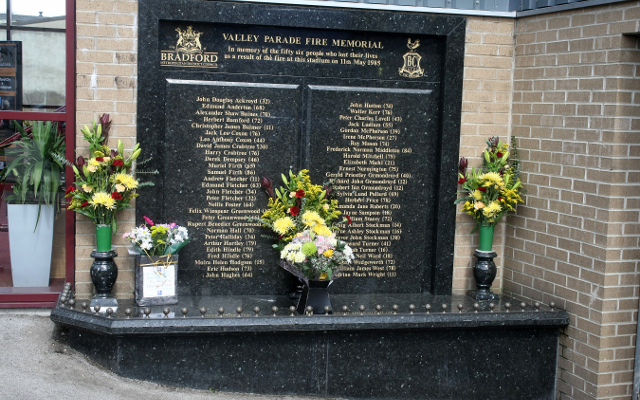 Phil Parkinson’s men are just one game away from Wembley.

Win, lose or draw, Bradford City will play their last cup game of the season at Valley Parade today, when they take on Championship side, Reading for a place in the semi-final of the FA Cup. The televised match, which could take the Bantams to Wembley, has been earmarked as the perfect opportunity for the footballing world to pay tribute to the 56 fans that died at the ground, nearly 30 years ago.

The horrific events of that day have been somewhat overshadowed by two other stadium disasters of the 1980’s – Heysel and Hillsborough – but what happened at the Yorkshire ground is certainly no less tragic.

As Bradford played their final league game of the 1984/85 season, against Lincoln City, Valley Parade was celebrating the club’s triumph in the old Third Division, but within just a few minutes of a small fire being reported, flames had engulfed an entire stand made of wood, which would lead to the deaths of 56, and the serious injuries of over 200 people.

For the unfortunate fans who were at the ground that day, the memories remain unfortunately – but importantly – clear.

One person at the ground was Martin Preston, who described the scene in an interview with the Independent: “I remember it as a silent episode.

“It was like a scene you see in Hollywood,” he continued.

Preston – then a young police officer – recalls how he had supporters running towards him whilst they were on fire, and how he was helped by fans who would traditionally be discarded as hooligans.

As the landmark anniversary approaches, the club will no doubt be looking to pay tribute to all those affected by the fire, by pulling off another upset – having already defeated Premier League sides, Chelsea and Sunderland – and finally bringing the awful events of May 11th 1985 to the forefront of English football’s conscience.