Jonny Evans could be banned…

Jonny Evans could face a six match ban after a recent spitting incident in Man Utd’s 1-0 win over Newcastle in mid-week.

Evans has denied the FA charge, and fans of the club better hope that the FA believe his version of events. 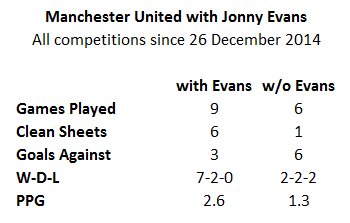 With Evans in the side Utd have not lost since Boxing Day, winning seven and drawing two. Without him? They’ve only kept one clean sheet and won just twice.

These are incredible stats, and without seeing them for yourself you might find them hard to believe. The importance of Evans goes to show however, just how poor the defence of Louis van Gaal’s side is at the moment.