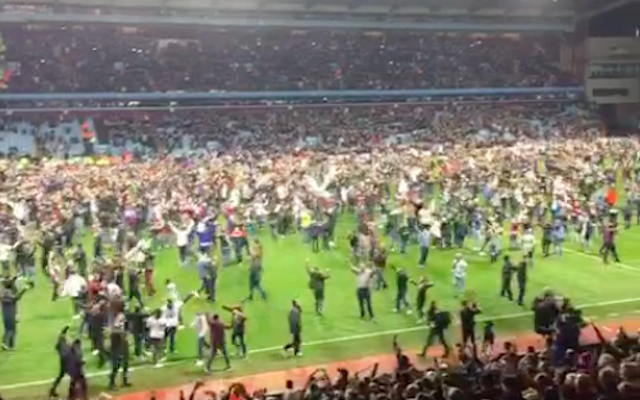 You’d expect a sizeable penalty could be enforced by the FA.

Aston Villa could face a heavy fine and the potential closure of their ground for several games after a number of West Brom players appeared to be assaulted when fans invaded the pitch toward the end of the FA Cup quarterfinal at Villa Park.

Supporters rushed onto the pitch on three separate occasions as Villa edged closer to a win over their derby rivals.

Villa goalscorer Fabian Delph claimed he was kissed and bitten whilst West Brom stars Boaz Myhill, Callum McManaman and Craig Dawson all appeared to be roughed up by supporters with McManaman hit on the back of the head as he attempted to exit the field.

As well as the mass pitch invasion on the final whistle, Villa fans had to be curtailed by security staff in injury time with the game having to be stopped for several minutes whilst fans were shephereded off.

However, some could be seen gathering on the sidelines waiting for the final whistle to blow to charge the pitch.

Even though the incident was caused by Villa supporters, club captain Fabian Delph said it was also a dangerous situation for the club’s players.

“It was very, very scary. My armband got nicked, some got my boot but I could appreciate the relief the fans are feeling after a result like that. People tried to kiss me, and were biting me. It was dangerous,” said Delph, reports Daily Mail.

“It’s disgraceful. We don’t want to see those scenes. They’ve beaten us and for that to happen, that’s just mindless idiots. If you’re Villa, you need to look at the stewards as they came over to our fans and there was nobody there,” said West Brom manager Tony Pulis.

“Aston Villa should look at the stewarding. It’s a quarter-final, it’s a full house and you know it’s going to be tasty. So you should have stewards both ends of the pitch. 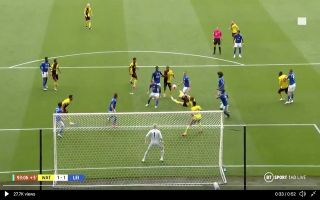