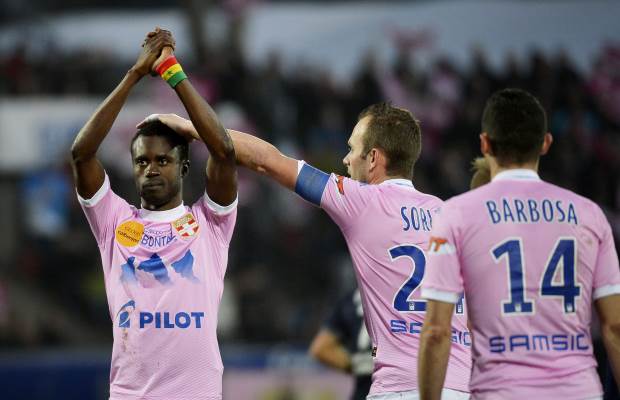 Evian Thonon Gaillard were thoroughly outclassed by AS Monaco in Ligue 1 on Saturday evening, falling to a 3-1 defeat.

Evian didn’t convince in defence right from the off and fell behind on 18 minutes when Anthony Martial opened the scoring.

Kassim Abdallah put the ball past his own keeper Benjamin Leroy on 35 minutes after sumptuous work from the ice-cold Dimitar Berbatov, before Almamy Toure added a third inside the second-half.

Sougou scored a consolation goal for Evian with 12 minutes to play, but in truth, the club of the Savoie region never looked like making an impact on this contest.

“Today we played against a great Monaco side,” Sougou began, as reported by Evian’s official website, “we struggled to press because right from the off we were late getting to their passes, that was our problem.

“It’s still been a good week because in three matches we’ve got six points. At this rhythm, I think that we are going to keep going well.

“This defeat will allow us to put our feet back on the ground and to say that we’ve not yet done enough.”

The goal was Sougou’s first of the season. Despite playing in 16 matches, the right winger has struggled to impress during his loan from Marseille, contributing only three assists.

“We need 40 points as quickly as possible and for the moment, we don’t have it. Monaco were stronger than us, they played the match at their rhythm but we knew beforehand that they would be a hard team to play against.”