Arsenal looking for their first win at Old Trafford in nearly a decade.

Arsenal take-on Man United in the FA Cup quarter-final at Old Trafford in what is undoubtedly the tie of the round which pits the two teams who have won this competition the most against each other.

For the Gunners, it is all about getting over the psychological barrier which is a factor when going to Old Trafford and the north London side will certainly be wanting revenge for somehow losing the league encounter between the two sides earlier on in the season.

Here is how the Gunners are expected to line-up.

Trained ahead of the encounter after being a doubt heading into the game and will no doubt be hoping to impress and get back in the starting XI on a regular basis. 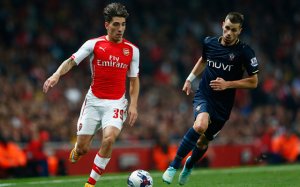 Continues to impress and grow on a weekly basis and is one of the first names on the team sheet – Mathieu Debuchy has a fight on his hands when he returns.

Returned to the side in midweek with a commanding performance after being given a rest against Everton last week, Mertesacker will be key for the defensive side of Arsenal’s game.

Gabriel’s hamstring injury mean Koscielny will come a back in and partner Mertesacker hoping to replicate the defensive performance at the Etihad Stadium in January.

Has returned to the team ahead of the perviously impressive Nacho Monreal and needs to do more to cement his place with Charlie Austin’s goal on Wednesday night partly his fault.