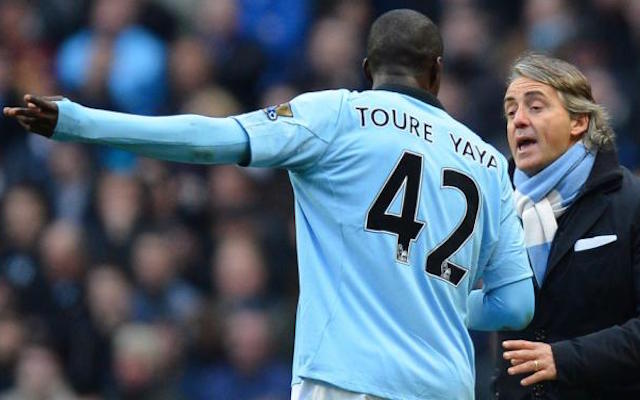 Roberto Mancini has reignited rumours that Man City midfielder Yaya Toure could sign for Inter Milan by saying the Ivorian would definitely join the club if he moved to Serie A.

There has been mounting speculation Toure could leave the club at the end of this season despite two years left on his current City deal.

And Mancini, who managed the midfielder at the Etiahad from 2010 to 2013, hinted there was some kind of agreement in place with the 31-year-old by saying it would be ‘certain’ he would join Inter if he moved to Italy.

“If, as it seems, he wants to have an experience in Italy, then there is this possibility he could come here.

“It won’t be easy, but he’s a player with incredible technique and character. Would Inter be his first choice? That’s certain.”

And Toure’s not the only City man Mancini admitted he was chasing, saying he failed in an attempt to sign Micah Richards, who is currently on loan with Fiorentina, in the January window.

“I tried to bring Micah Richards here in January,” said Mancini. “He was one of my players when I was at Manchester City, too.

“Fiorentina seemed open to the idea but it didn’t come off.”

Inter have seen a dramatic fall from the heights of their Champions League successes of 2010 under Jose Mourinho, barely scrapping into the Europa League this season.

It’s no surprise Mancini is looking to revamp the squad and already purchased the likes of Xherdan Shaqiri in the January window whilst taking Arsenal’s Lukas Podolski on loan.

And Mancini thinks with further squad renovation in the summer his side can compete for the title next season.

“Yes, next year we will be a Scudetto contender,” he said. “This faith comes from what we are doing now. We have a great foundation.

“I see the guys improving all the time. Everyone is growing. Next year we can count on fighting with Juve, Napoli and Roma for the title.”