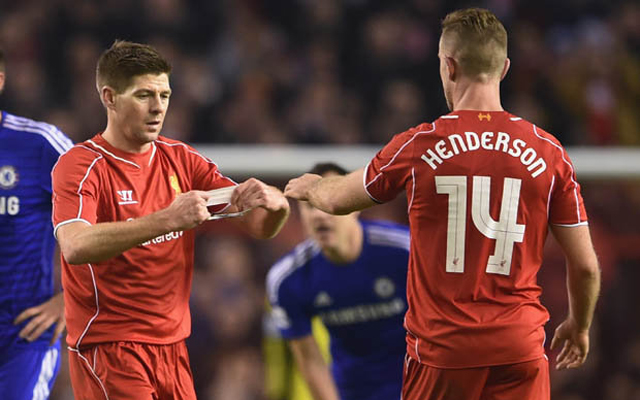 Liverpool midfielder Jordan Henderson has been tipped by many to succeed Steven Gerrard as the club’s captain, but the 24-year-old has refused to give in to speculation, claiming that there are many strong candidates to take over the armband.

Henderson has been highly impressive in the absence of an injured Gerrard over the last month, taking to the role superbly, and inspiring the Premier League wins over Manchester City and Burnley with brilliant individual goals.

The former Sunderland youngster, who was quoted by the Daily Star, said: “Next season we’ll see what happens because it might not be me succeeding Stevie, it might be someone else. There are a lot of strong leaders in the dressing room.

“There are a lot of big characters in the team – down-to-earth, humble people. Mama (Sakho), Emre (Can) and Skerts (Martin Skrtel) have developed a strong collective understanding.

“You can see their passion, they’re desperate to win, they give everything. Studge (Daniel Sturridge) is a big character. Lucas (Leiva) is too. I can only do the current job the best I can.

Henderson was also full of praise for current captain Steven Gerrard, adding: “Stevie’s the perfect captain really. He’s a leader on and off the field. He’s someone we all look up to. He always puts the team first. He’s very unselfish.

“When I became vice-captain, I tried to learn as much from him as I could. The thing I’ve probably learnt most from Stevie is the way he overcomes the disappointments.

“I think that defines you more than anything. I can relate to it. If I look back to my first season here, it wasn’t easy. But it made me stronger.”