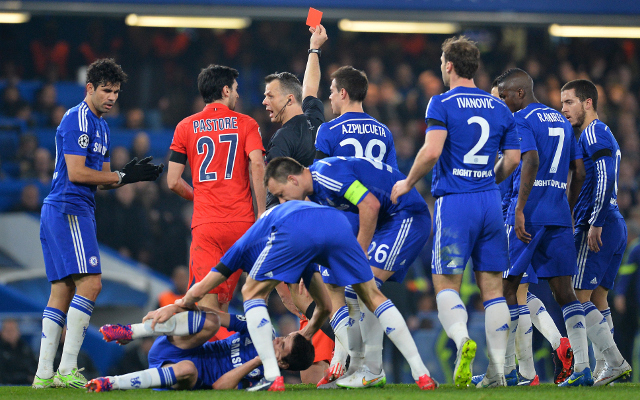 Chelsea skipper John Terry claims his side only swamped the referee over Paris Saint-Germain striker Zlatan Ibrahimovic’s challenge on Oscar – as PSG did first.

The 34-year-old has hit back at the criticism over the way the Blues encouraged referee Bjorn Kuipers to send off Ibrahimovic, insisting that the Ligue 1 champions started the controversy: “There was an awful lot going on but ?I don’t think anyone got caught up in it. Once they’re charging the ref, the only thing we can do is respond,” as quoted by The Guardian.

“You can’t as a group of players let them surround the ref, trying to get our players booked. For me if I have to run 20, 30 yards, it doesn’t look great.

“But when you’re standing back and seeing five or six of their players surrounding the ref, for me I think I support my team-mates. And once I go, four or five go with me, it doesn’t look good at all but that’s part of the game. We’ll match it if people want to mix it, that’s part of our game as well.”

Nonetheless, Sky Sports pundit and former Liverpool defender Jamie Carragher has branded Chelsea a “disgrace“, along with fellow presenter Graeme Souness described Mourinho’s side as “pathetic” – in what has stolen the limelight off the French outfit’s ‘ stunning victory.