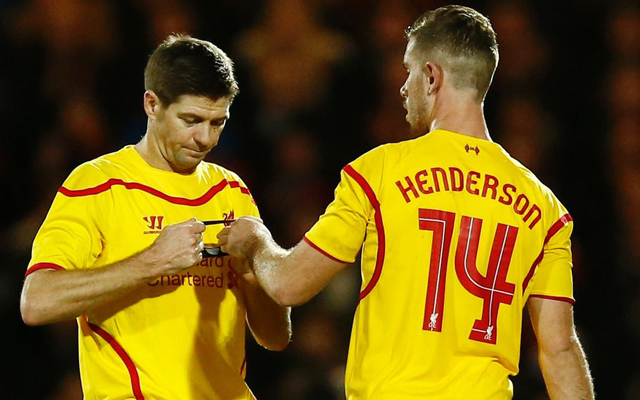 He might be attempting to downplay it, but the Liverpool captaincy is not going to anyone other than Jordan Henderson. He brushed aside comparisons between himself and current skipper Steven Gerrard, but in reality it’s hard not to see the similarities between them.

That’s not to say that Henderson is a direct replacement for Gerrard – there is not currently a player in the world as good – and as well suited to the club  – as the Reds skipper was at his peak – but to suggest that he won’t be the main man next year is utter madness.

Henderson was quoted by the Daily Star as saying: “Next season we’ll see what happens because it might not be me succeeding Stevie, it might be someone else. There are a lot of strong leaders in the dressing room.

“There are a lot of big characters in the team – down-to-earth, humble people. Mama (Sakho), Emre (Can) and Skerts (Martin Skrtel) have developed a strong collective understanding. You can see their passion, they’re desperate to win, they give everything.

“Studge (Daniel Sturridge) is a big character. Lucas (Leiva) is too. I can only do the current job the best I can.”

Let’s call that the ‘politically correct’ answer – a good sign for a captain straight off the bat. Whether it’s modesty, humility, or even if he genuinely believes that he’s not the obvious choice to replace Gerrard, it’s hard to believe him.

The 24-year-old has been superb in his role as vice-captain so far this season – the Reds are yet to lose a Premier League game under his leadership – while the armband has inspired an upturn his own performances, with recent goals against Manchester City and Burnley resulting in a fresh wave of appreciation from Liverpool supporters.

Martin Skrtel will likely take over the role of vice-captain. Based on the current form of the pair, it’s hard to see any reason why the Slovakian will have overtaken Henderson in the race to replace their MLS-bound skipper by the start of next season.

Mamadou Sakho and Lucas Leiva have the desired leadership qualities, but have both struggled with injuries so far this season, meaning their proposed roles as automatic-starters next season are far from guaranteed.

The recent revival of Dejan Lovren, as well as the emergence of Emre Can, means that Sakho could be in and out of the team, while Lucas will likely go head-to-head with the in-form Joe Allen for his place in the side.

Can has been simply sensational so far this season, but only became a regular in the team back in December. The German is still just 21, and, while he will have already been marked down as one for the future, next season will be too soon for him to take over.

Sturridge has also struggled with injuries this season, while his style of play – running and chasing everything up front – means he’s unlikely to play as regularly as a central midfielder.

That essentially leaves us with Henderson. We shouldn’t undersell him. The England international has plenty to offer – other than the fact that he’s the only viable candidate.

When Mario Balotelli demanded to take the penalty against Besiktas in the Europa League last month, Henderson coolly accepted the Italian’s exuberance, and pulled the frustrated figure of Sturridge away from the impending argument. Liverpool scored, won the game, and Henderson was the first to join in with the celebrations and congratulate his teammate.

That is exactly the kind of mentality you need – you need to keep the unity between your teammates and make the big on-the-field decisions that are likely to decide the game. Henderson will be the next Liverpool captain, and the sooner he embraces that, the sooner we can stop pretending otherwise.