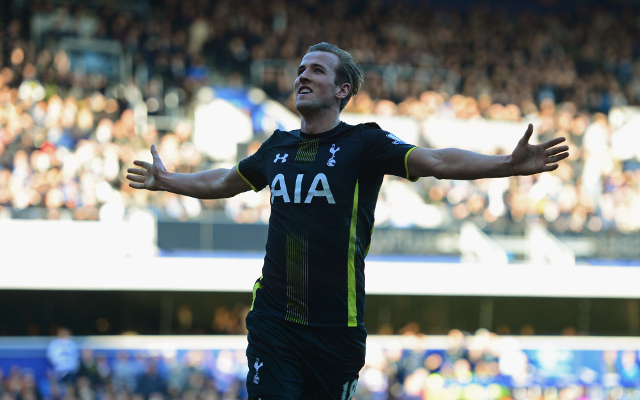 Ahead of Sunday’s game between Manchester United and Tottenham Hotspur at Old Trafford, it has been revealed that Spurs hotshot Harry Kane has scored more goals than the entire Red Devils attack.

Kane has scored 26 goals in all competitions in a whirlwind season for the striker, netting 16 Premier League goals. Manchester United’s attacking trio of Robin van Persie, Wayne Rooney and Radamel Falcao have only managed a total of 25 goals in the same period, showing just how well the Spurs striker has done – and how disappointing the Red Devils front line has been.

Some of the goalscoring problems at Old Trafford have stemmed from captain Wayne Rooney being deployed as a midfielder recently, during an injury crisis, along with a hugely disappointing season for Colombian Radamel Falcao and a recent injury for Robin van Persie.

The stat will top off a miserable week for the Red Devils after being knocked out of the FA Cup at home to Arsenal on Monday, as old-boy Danny Welbeck returned to score the winner in a 2-1 defeat.

Arsenal and England striker Danny Welbeck was moved on by manager Louis van Gaal as he was deemed surplus to requirements, replaced with the misfiring Falcao, so he will have especially enjoyed scoring at Old Trafford.

Former Porto and Atletico Madrid striker Falcao suffered an embarrassing demotion to the Manchester United U21 side this week and reports have emerged which say he realises he made the wrong choice joining the club this summer.

Harry Kane, meanwhile, was awarded the Premier League Player of the Month award for the second month in succession, after scoring four goals in February. He is also likely to earn his first senior call-up for England ahead of the up-coming World Cup qualifier against Lithuania and friendly against Italy.