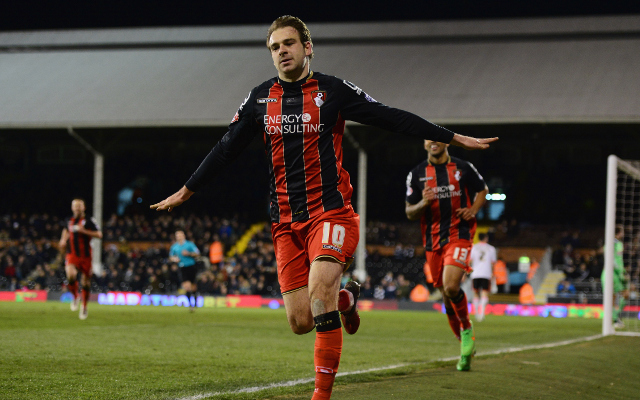 With nine games to go, three teams – Bournemouth, Watford, and Middlesbrough – currently sit top of the Championship level on 69 points. The top three all won this weekend, while Derby and Norwich’s draw leaves them only two and three points off the pace respectively. However, it was a bad weekend for Millwall, who now sit second bottom, nine points off safety.

READ MORE:
Championship Transfer News
(Video) Who is set to for promotion to the Premier League: Seven Championship challengers including resurgent Middlesbrough and Eddie Howe’s Bournemouth
(Video) Exciting Chelsea Youngster Patrick Bamford Scores Quality Goal for Middlesbrough Against Millwall: One for the Future?

Here are some of the highlights across the division this weekend…

Middlesbrough went briefly back to the top of the table this lunchtime with an emphatic win over seventh place Ipswich. A brace from Patrick Bamford sealed the win.

David Cotterill’s opener was cancelled out by Joe Lolley’s first half equaliser at St Andrews. Both sides remain in the bottom half of the table, but should be safe.

Two goals from Adam Le Fondre gave Neil Lennon’s side a 2-0, and practically guaranteed the Trotters’ survival for another year. Millwall however, are in deep trouble, and now sit nine points off safety.

Brett Pitman’s first half hat-trick sent Bournemouth back to the top of the table. While Blackpool’s defeat means that they could be relegated after the next two games.

Goals from Bruno and Rajiv van La Parra ensured the points were shared at the Amex. Wolves stay in contention for a play-off spot.

Two of the league’s in form teams played out a goalless draw at Elland Road. The point puts Forest eight off sixth.

John Ruddy’s own goal denied the Canaries a massive victory at Carrow Road, after Cameron Jerome’s opener. A point will help neither side in their push for automatic promotion.

A Jermaine Pennant brace gave Wigan a lifeline in their battle to beat the drop, whilst also dragging Rotherham back into trouble.

Matt Smith’s equaliser took Fulham up to 20th, after Stevie May had put the Owls in front ten minutes into the second half.

The Hornets matched their co-leaders in the league by scoring four goals. Almen Abdi, Matej Vydra, Troy Deeney, and Fernando Forestieri ensured that Jem Karacan’s goal for the Royals had no impact on the result.