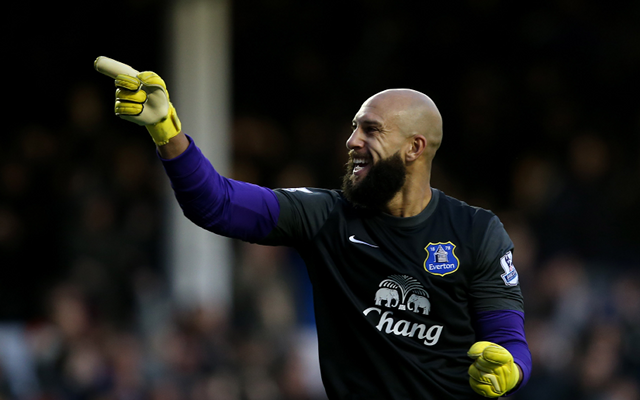 Everton goalkeeper Tim Howard has no intention of leaving Goodison Park to re-join the MLS, suggesting he’d be crazy to go back to the American league according to MirrorSport.

The American stopper has spent the last 11 years in the Premier League since he joined Manchester United from the MetroStars and plans to retire in 2018 when his contract at Goodison Park ends.

The USA international is delighted with the coverage the MLS is generating with marquee signings like Steven Gerrard, Frank Lampard and Kaka, who have followed on from David Beckham and Thierry Henry.

The Toffees keeper said, “I feel strong. I have got the fire in my belly. But I have three years left and then I finish. That’s it.

“The coverage MLS is getting now is incredible, with Frank and Stevie going over. It’s exciting to watch and there’s a buzz about it.

“But I think it would be crazy to talk about leaving this club.

“The chairman pays me very well and it would be silly to talk about other teams.”

Howard and his Everton team have had a disappointing season in the Premier League, sitting 14th and just six points off the relegation zone, but will be hoping of a late revival, having beaten Newcastle 3-0, after their good Europa League form.