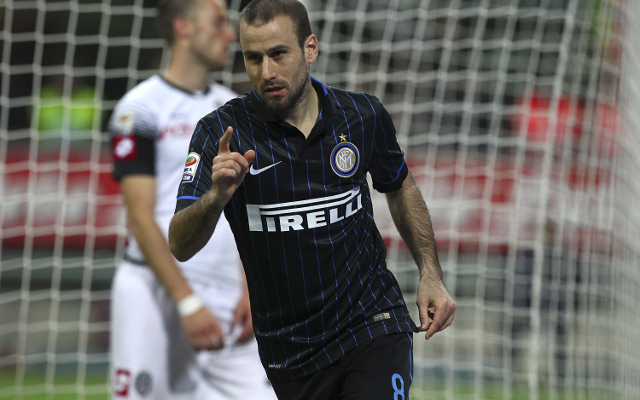 Victory could have moved Inter Milan up to seventh in the league, while a point does little to ease the worries of the Seahorses’ supporters, as each game is a must-win if they are to remain the top-flight of Italian football.

SEE ALSO:
(Video) Verona 2-0 Napoli Serie A highlights: How huge a blow is this to Rafa Benitez’s Champions League hopes?

It was Inter who dominated the opening exchanges, yet they were punished for not making it count by Cesena on the break.

After 30 minutes of play, Fredy Guarin was dispossessed in midfield, with striker Gregorie Defrel breaking forward, and lifting a beautifully lofted finish over the head of goalkeeper Samir Handanovic, who could only look on as the ball nestled in the back of the net to put Cesena one goal up.

The Italian giants headed into the dressing room a goal down, but came out firing following the half-time break.

After just seconds of the second-half, Mauro Icardi had a stunning over-head kick ruled out for offside – yet just three minutes they finally got their goal.

Rodrigo Palacio met the cross of Icardi from the right-flank to guide the ball neatly home with 48 minutes played.

Three points could have gone either way – but the elusive second goal eluded both in a pulsating half of football – with a point really not doing either side any favours.