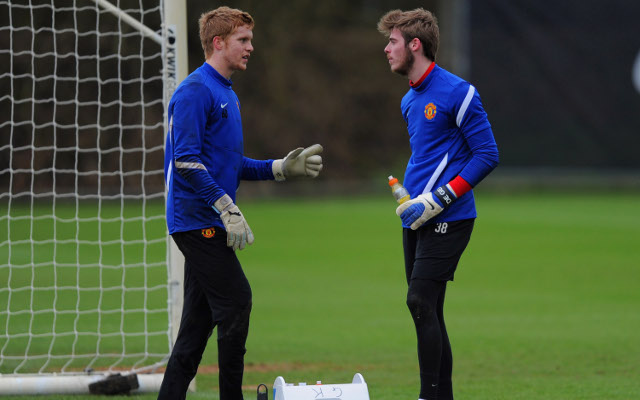 Manchester United star Ben Amos plans to leave the club in the summer after falling behind Victor Valdes and Anders Lindegaard in the pecking order at Old Trafford, reports the Daily Express.

The 24-year-old also revealed that he thought he was going to be the number two keeper at the club this season, behind first choice David De Gea. He even expected to be playing in the cup competitions ahead of Anders Lindegaard.

However, with the arrival of Victor Valdes in January the goalie has effectively slipped to fourth in the pecking order, with Lindegaard being preferred on the bench before the former Barcelona man got to Old Trafford. This has left the ex-England Under 21’s star looking for a move.

He said of the Valdes signing: “You could say that was the final nail in the coffin. Pre-season, I was told I was No.2. With the cup games, if I’d got a sniff of that, that would have made it worthwhile sticking around for. As soon as Victor was brought in, I was essentially demoted to fourth. You’ve got to move on.”

It is unlikely Amos will be missed much by the Red Devils, having only made seven appearances in seven years involved with the senior set up. He has been on loan at Bolton Wanderers in the Championship since January.