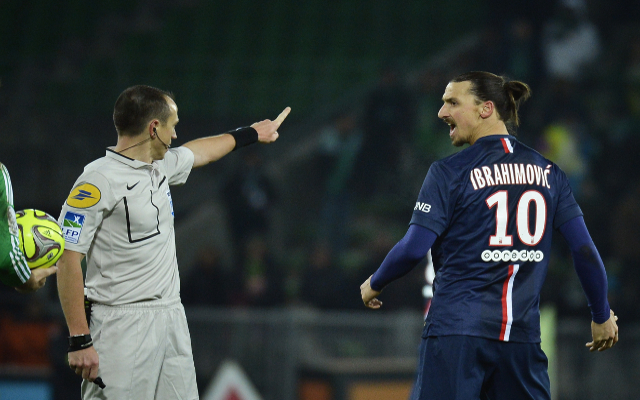 Paris Saint-Germain’s Zlatan Ibrahmovic launched into an explosive rant against the referee following his side’s 3-2 defeat at the hands of Girondins de Bordeaux on Sunday evening.

The Swede was thrown into a rage by several decision made by Lionel Jaffredo, and proceeded to slam both the referee and the entire nation of France, according to L’Equipe.

While it’s surely a bit harsh for Zlatan to dismiss the credibility of a whole nation on the back of some supposedly sub-par refereeing, does he have a point about Mr. Jaffredo’s management of the match?

Indeed, the referee missed a blatant backpass on 86 minutes when Lamine Sane-the scorer of Bordeaux’s opening goal-passed the ball back to goalkeeper Cedric Carrasso, who promptly picked it up.

Ibra clamoured for a freekick, but his exhorts fell on deaf ears.

Shortly beforehand, Zlatan had also been angered when an obvious foul by Tiago Ilori was missed and the ref chose to play advantage for the Bordelais.

Maybe, after these two late blunders, we can begin to sympathise with the Swedish striker…but just a little.