Manchester City head to the Nou Camp knowing that they are required to do something they have never done before, beat Barcelona. The Premier League champions go into the second leg of their Champions League tie needing to score at least twice, after a brace from Luis Suarez gave the Spanish giants a 2-1 victory at the Etihad Stadium three weeks ago.

Despite the loss to Luis Enrique’s side, City gained a huge slice of the momentum after Joe Hart saved a Lionel Messi penalty in the dying moments in Manchester. If Messi had converted the spot-kick, then City would be resigned to following Chelsea – and potentially Arsenal – out of the competition, and leaving no English sides in the last eight.

However, Manuel Pellegrini’s side are coming off the back of a shock defeat to Burnley at the weekend, and speculation over the manager’s future remains rife. Progression on Wednesday may just take the Chilean’s head off the chopping block.

Here is how we expect City to line up for the second leg:

As mentioned, the England keeper did a fantastic job of giving City a glimmer of hope in the first leg, and he remains confident that an upset can take place.

Zabaleta was sent off the last time he played in the Nou Camp, and he’s in for another tough night, having to mark Neymar. 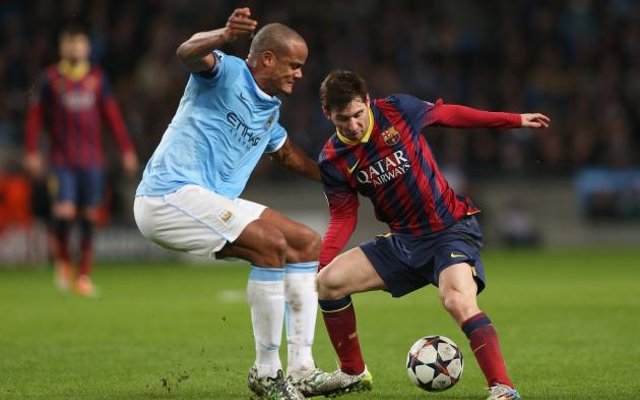 The captain was recalled for the game against Burnley, after being dropped for an alleged spat with Fernandinho. If anyone is going to inspire City to victory, it is the Belgian.

Demichelis needlessly gave away the free-kick that led to Burnley’s winner on Saturday, and he’ll be coming up against a much stronger attack than the one that he faced at Turf Moor.