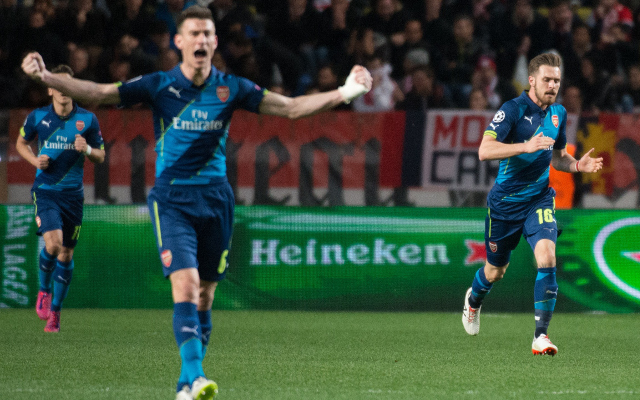 Arsenal went up against Monaco at the Stade Louis II on Tuesday night in their Champions League last-16 second leg, having lost the home leg 3-1 two weeks ago.

The Gunners had much of the play in the first half as sights at goal were ground out by the determined away side in a showing miles apart from their Emirates first-leg horror show. Frenchman Olivier Giroud set the tone for his side’s first half performance with a close range header he put wide.

The north London side continued to carve out chances in a dominant first-half showing against the Champions League’s best defence this season before taking a deserved lead through Giroud with brilliant finish from a tight angle.

Their good work carried on following the goal, with the man of the moment Giroud unlucky not to grab a second after good work down the flank from Danny Welbeck.

In the second half Arsenal carried on where they left off in the first, bombarding the Monaco box with attack after attack. That pressure finally paid off with 11 minutes to go, following an Aaron Ramsey goal to put his side within a goal of progression.

The final few minutes consisted of siege being laid on the Monaco goal, unfortunately for the Gunners, in vein. The best chance coming in the 84th minute as Subasic scrambled the ball off the goal-line.