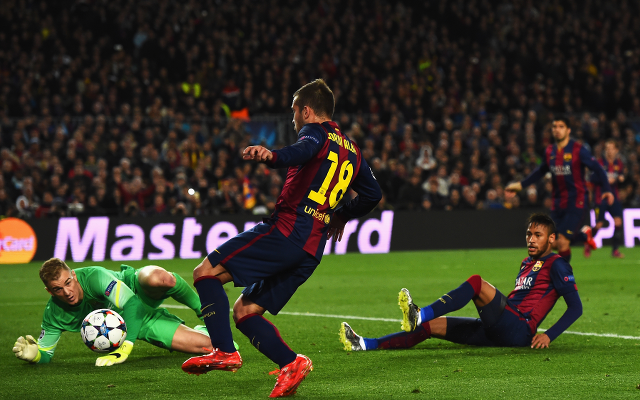 If it wasn’t for Joe Hart, the scoreline at the Camp Nou between Man City and Barcelona would have certainly been more embarrassing as the England man kept the likes of Lionel Messi, Luis Suarez and Neymar at bay.

As Man City chased the two goals they needed, Hart was often exposed to one-on-one confrontations against Europe’s fearsome trio, but constantly stood tall and was often bravely diving at the feet of the attackers to prevent the goals.

Here is how Twitter reacted to one of the greatest goalkeeping performances this competition has seen in a while.

Hart last off the pitch as #mcfc fans sing “England’s No 1”. Best display of his career. He’ll probably stop Neymar getting down the tunnel

Hope Joe Hart gets the plaudits he deserves. That was an astonishing display. If he was American they’d make him Secretary of Defence. #mcfc — James Masters (@Masters_JamesD) March 18, 2015

Joe Hart asked on Sky what it was like for him tonight. “Busy.”