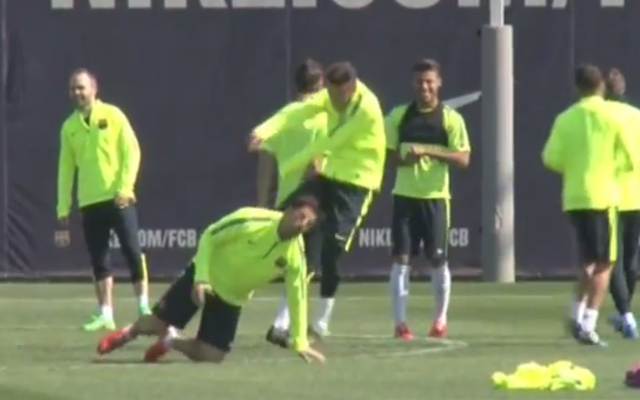 Barcelona are preparing to welcome Manchester City to the Camp Nou on Wednesday night, in the Champions League last 16 second-leg tie, and the Spanish giants are getting ‘playful’ in training…

Rumours of unrest between Lionel Messi and manager Luis Enrique have dwindled, with the club currently enjoying a stunning bout of form – having won 16 of their last 17 fixtures.

Poor Luis Suarez, however, just can’t catch a break… The Uruguayan blamed the continuous attacks by the English press on his decision to leave Liverpool and the Premier League, but over in Spain, the striker is now getting attacked by his own team-mates!

The former Anfield star fell to the floor hurt in training, only for team-mate Neymar to respond with this SAVAGE boot up the bum… This could be sore in the morning!