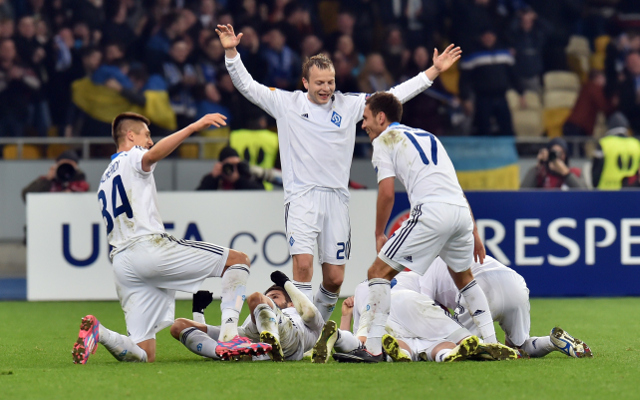 Everton were England’s last hope in Europe this season, and their form in the Europa League has been superb so far. They crashed out disappointingly this Thursday, however, losing 5-2 to Dinamo Kiev on the night – 6-4 on aggregate.

SEE MORE:
Everton Transfer News
(Video) Wonder goal! Dinamo Kiev 5-1 Everton: Potential goal of the tournament from Antunes?
How the England squad would line up if picked on form: Man United dominate, but just two Liverpool and no Arsenal stars

Everton’s defence looked sloppy right from the off, and there were warning signs early on in the game.

Long time Liverpool target Andriy Yarmolenko punished the visitors for not heeding these warnings, with a fantastic solo effort finished off with a superb long ranged strike.

Roberto Martinez’s side just couldn’t handle Yarmolenko, and more sloppy defending almost saw the Ukrainian through for another goal. A fine save from Tim Howard was all that kept him out, but the warning signs were still there.

Everton hit back through Romelu Lukaku, with the Belgian international pouncing on a loose ball and smashing in an excellent long range effort of his own.

The Premier League side weren’t celebrating for long however, as once again Kiev were gifted a chance.

Yarmolenko was there to pounce once again, slotting in from close range after a goalmouth scramble.

The home side soon extended their lead further, Miguel Veloso’s shot deflecting past Howard off of Seamus Coleman. It didn’t change things hugely however, as due to the away goals rule Everton still needed to score just one.

That all changed however, when Oleh Husyev made it 4-1. His first shot was blocked, but it fell straight back to him for a tap in. The game wasn’t out of reach for Everton, but it wasn’t looking good.

Ross Barkley had been trying to make things happen all evening, and almost clawed one back for his side. His curling shot looked destined for the top corner, but struck the post agonisingly and bounced out.

The England international was outdone however, when Vitorino Antunes picked up the ball in the middle of the park. The space opened up in front of him, and he struck a venomous shot towards goal from distance.

Tim Howard could do nothing to stop it, and could only watch helplessly as one of the goals of the tournament flew past him and into the top corner.

Club captain Phil Jagielka grabbed a late consolation goal for Everton, but it always looked out of reach.

There was some late pressure from Everton, but in the end their efforts proved fruitless, and the last British team crashed out of Europe.