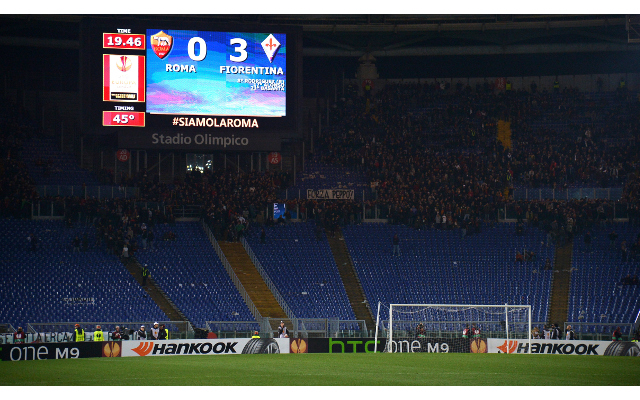 Fiorentina came out on top in the Europa League’s last 16 all-Italian clash against Roma, after some terrible defending gave them a 3-0 victory in the second leg, and a 4-1 win on aggregate.

Roma went into the game as favourites after avoiding defeat and bagging a crucial away goal in the first leg, but they were instantly on the back foot, conceding a penalty inside the first ten minutes at the Stadio Olimpico thanks to a needless challenge from Jose Holebas.

They were given hope however after Gonzalo Rodriguez was ordered to retake his converted spot-kick, as some of his teammates encroached in the box.

But Rodriguez repeated the feat, slotting it the other side of Lukasz Skorupski.

Skorupski could do little about the opener, but he was the villain for the goal that arguably sealed the tie. The Polish stopper attempted to keep the ball from going out for a Fiorentina corner, but in doing so, handed it straight to former Sunderland defender Marcos Alonso, who had the simple task of walking the ball into the back of net, leaving Roma needing to score three times to progress.

But it got worse for the team currently second in Serie A, as Jose Basanta had a free header from a corner to put the away side 3-0 up on the night, and leaving Roma’s players looking shell-shocked, and their fans flooding at out of the Olimpico.

The second half started as a much more even contest, but Roma were still unable to breach the Fiorentina defence.

A frustrating night was compounded when Gervinho squandered their best chance on the hour mark. The former Arsenal striker showed composure to take the ball calmly round Neto in the away goal, but was challenged before he could score.

The misery was completed for Roma as full time approached, when Adem Ljajic was sent off for a second yellow.