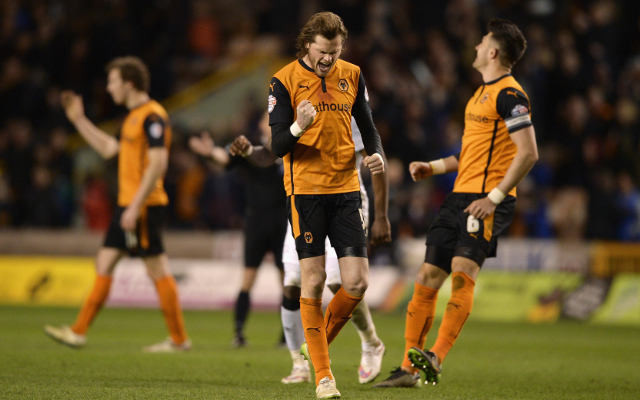 One time leaders of the Championship Derby County have almost completely blown their challenge for an automatic promotion spot after a howler from goalkeeper Lee Grant handed Wolves a 2-0 victory at Molineux.

Derby came closest to breaking the deadlock in the first half, Thomas Ince responding to criticism for turning down the opportunity to play for England’s under-21 side by striking the bar with an excellent effort from the edge of the Wolves area.

There was controversy before the interval as Darren Bent was brought down on the edge of the Wolves box, whilst almost clean through on goal. The culprit for the foul Danny Batth was not dismissed – despite appearing to be the last man – nor did the referee allow an advantage – with Ince following up after the foul to put the ball in for the Rams. Manager Steve McLaren was less than happy with the decision.

It was Kenny Jackett’s side that opened the scoring three minutes after the break, when some poor defending allowed Nouha Dicko to place his shot under Grant in the Derby goal.

While the 32-year-old was not at fault for the first, he will have to take almost all the blame for the goal that killed off the contest, and potentially Derby’s automatic promotion charge. Richard Keogh’s skied clearance came down in the six-yard box, and Grant’s attempt to punch the ball away saw it spin off his gloves and into the net.

The three points put Wolves level with Brentford, who currently occupy that last play-off spot. Defeat leaves Derby fifth in the table, but crucially they could fall six points behind the top two depending on the outcome of Middlesbrough’s clash with Bournemouth tomorrow.