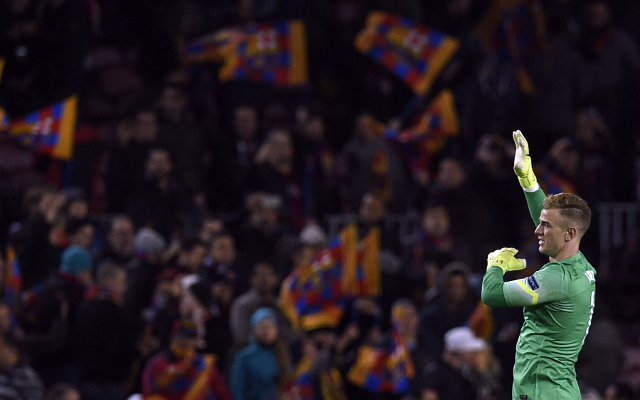 Manchester United hero Paul Scholes has sensationally criticised Joe Hart following City’s defeat to Barcelona, despite the England goalkeeper’s incredible performance in the Nou Camp, according to the Daily Mail.

Hart made ten saves during the second leg of their Champions League last 16 tie with the Spanish giants – and was largely credited as the reason that Manuel Pellegrini’s side only lost 1-0 in Spain – but Scholes was still unhappy with what he saw from the 27-year-old.

“Well done to Joe Hart for a record number of saves in a Champions League game this season, and without him it would undoubtedly been worse for City,” Scholes said.

“But what I could not get my head around was his evident delight at it all. Towards the end of the game he was smiling after every save and fist-bumping his defenders.

“City were losing 1-0. They were going out of the Champions League. What were they celebrating?” He added.

Not only had Hart produced a great performance in the return clash between the two, but he was arguably the reason that City took a glimmer of hope with them in the first place, having saved Lionel Messi’s late penalty at the Etihad Stadium, and keeping the defeat to just 2-1.

And if Sergio Aguero had converted a spot-kick of his own in Spain, then Hart’s save would have taken on added significance, as it meant that City only had to find one more goal in the remaining moments to go through themselves. But the Argentinian’s attempt was saved, and Hart’s efforts were in vain.