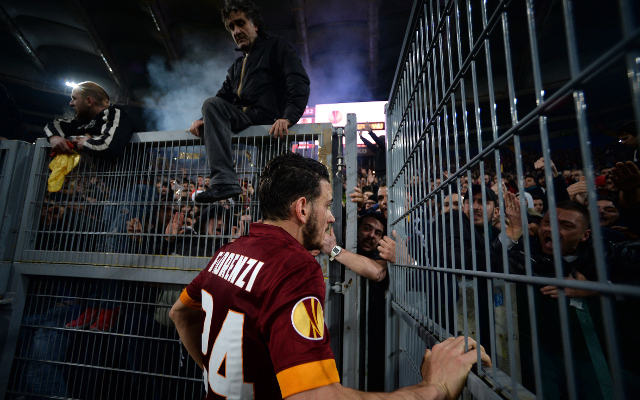 Roma’s fans have reacted to their side’s terrible 3-0 defeat at the hands of Serie A rivals Fiorentina by confronting the players, in scenes similar to those seen at both Borussia Dortmund, and Stuttgart earlier this season, reports the Daily Mail.

The heavy defeat in the second leg of the Europa League last 16 clash – which saw the home side lose 4-1 on aggregate – prompted disgruntled supporters, the ones who stayed at the game following a mass walkout when the third goal was scored before half-time, to confront the players at the end of the game to express their anger and disappointment.

The competition seemed to represent Rudi Garcia’s side only realistic opportunity for a trophy this season, as despite sitting in second in Serie A, they are fourteen points behind Juventus.

Not only has the defeat left their season in danger of fizzling out into mediocrity, but questions now linger over Garcia’s current position.

The result against Fiorentina was made worse by the manner of the three goals they conceded. The first goal came from the penalty spot, following a ridiculous challenge from Jose Holebas.

Then, goalkeeper Lukasz Skorupski literally handed Marcos Alonso the opportunity to double Vincenzo Montella’s side’s lead, before an unmarked Jose Basanta completed the rout when he headed home before the interval.