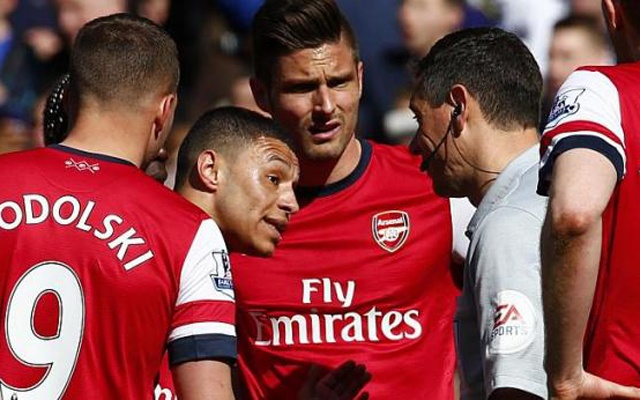 Arsenal manager Arsene Wenger has slammed Premier League players who continue to surround referees in an attempt to influence their decisions. Arguing with officials has become a growing trend in the top flight, and one the Frenchman wants to stop.

Football Association chairman Greg Dyke spoke out about the growing number of incidents earlier this week. He described players surrounding the referee as ‘scary’, and now it seems that Wenger agrees.

The Gunners boss, who was quoted by BBC Sport, told reporters: “You have to draw a line somewhere, you cannot go after every decision of the referee.

“I question myself on my individual behaviour, that is true, because I am sometimes keen to as well. I have looked back on the tape sometimes, and even sometimes at half-time I think to myself ‘come on, stop that, my friend’.

“And then I think in the second half I will not say a word to him any more. You want players to be ready to fight for each other. But how far has that to go in the behaviour?”

Wenger also confirmed that Arsenal forward Alexis Sanchez, who has scored just once in his last 11 games, is struggling with fatigue. He said: “Yes, he is a bit fatigued. I am tempted at some stage to give him a rest, I have been for a long time.

“Maybe his goalscoring is on his mind so he wants to do too much and he wants to force his game. It is just that every game now is so important, you always have a hesitation to do it.”