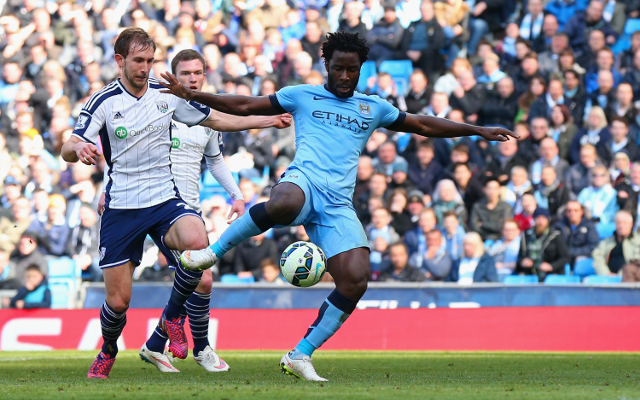 Manchester City secured a much needed win against ten man West Bromwich Albion, with a refereeing decision taking the headlines from Wilfried Bony who got his first goal for the club.

The game looked to be over before it even began, with West Brom seeing Gareth McAuley sent off in the opening minutes.

The red card was the correct decision, but it was actually Craig Dawson who made the last ditch foul on Bony.

Another poor refereeing decision, which will only serve to see the calls for technology increase.

Bony was causing the Baggies all sorts of problems, and the January signing pounced on a loose ball to open his account with the Citizens – banging in from close range with a fine finish.

West Brom were giving a decent account of themselves, despite being down to 10 men. It was arguably too much of a task to come back from 2-0 down though, and Fernando made the most of some poor defending from Jonas Olsson to grab City’s second.

Sergio Aguero was desperate for a goal, and was shooting whenever he got the opportunity. He couldn’t find the back of the net however, with his best chance coming when he struck the post from a tight angle.

The ball fell to Bony in the box, but he too struck the woodwork, and City couldn’t understand how they hadn’t scored.

The final nail came after some lazy defending from West Brom, with a simple corner routine getting the better of them. Gael Clichy cut the ball back for Stevan Jovetic, whose shot was turned in by David Silva to make it 3-0.

Back to winning ways for City, who will be hoping to put the pressure back on Chelsea at the top of the table.