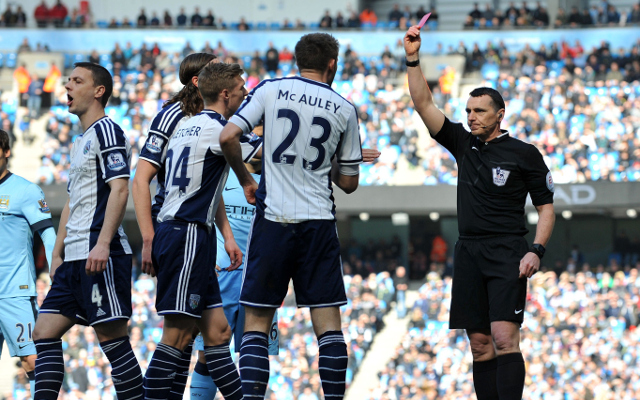 Saturday’s early game in the Premier League was practically over before it had begun.

That’s because underdogs West Bromwich Albion were reduced to ten men at Manchester City within the opening 90 seconds of the kick-off.

The decision to produce a red card was fair enough, but referee Neil Swarbrick made a huge blunder by showing it to the wrong player – dismissing Gareth McAuley, after Craig Dawson had committed a professional foul.

Mr Swarbrick is not the first official to royally cock-up in the Premier League, nor will he be the last while refs are giving so little help from technology.

Yes, we have goal-line cameras – great – but here are five mistakes that could have been prevented if football wasn’t still so stuck in the dark ages…

5. Mistaken identity – as mentioned above