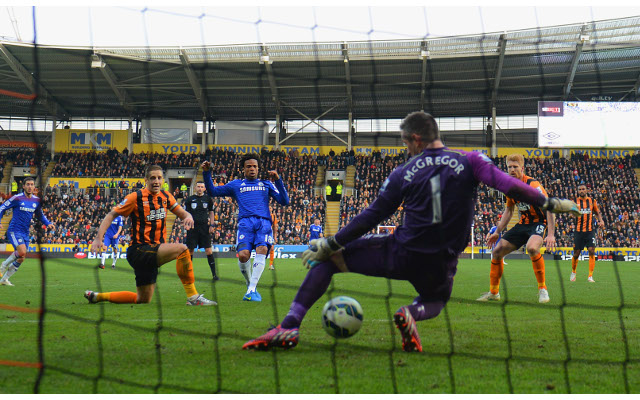 Chelsea substitute Loic Remy ensured that Jose Mourinho’s team took a narrow 3-2 victory over Hull City, and restored their six point lead over Manchester City at the top of the Premier League.

But they were forced to work hard for the three points, as Steve Bruce’s side battled back from conceding two early goals to go in at half-time level.

The league leaders had got off to a flyer, after Eden Hazard – who Mourinho suggested was the player of the season – opened the scoring with a fantastic strike from the edge of the area.

It looked like it was going to be a rout, as a sublime pass from Cesc Fabregas unlocked the Hull defence, and allowed striker Diego Costa to double the lead inside the first ten minutes with a wonderfully placed effort, which gave Allan McGregor no chance.

But Hull responded in the perfect manner, as the two full-backs combined to bring them back in the game. Andrew Robertson got down the left-wing, and curled a beautiful pass that eluded the entire Chelsea defence, and left Ahmed Elmohamady the simple task of halving the deficit.

And almost instantaneously, the seemingly impossible happened, as an awful error from Thibaut Courtois allowed Abel Hernandez to tap in, and level the game up.

But the Belgian keeper atoned for his error by making a fantastic triple save midway through the second half.

There was no change in Mourinho’s mentality as the game drew to a close, and with Diego Costa limping off. He threw on French striker Loic Remy, and he was rewarded within two minutes, as with his first touch, the forward bagged the winner, though Hull keeper Allan McGregor will know he should have done better.