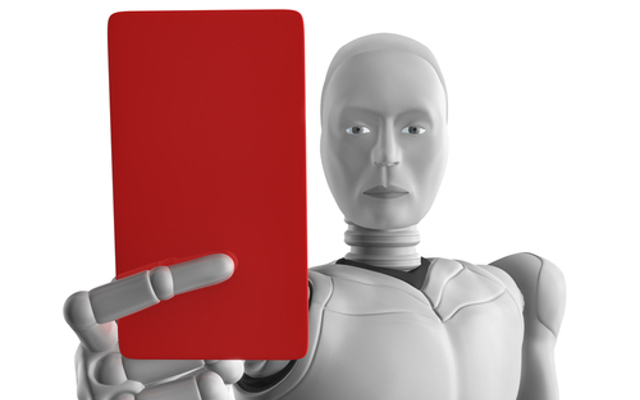 The Premier League witnessed another controversial incident on Saturday, leading to more calls for the introduction of video technology within the sport.

Referee Neil Swarbrick dismissed the wrong West Bromwich Albion player in their defeat to Manchester City, after just a minute and a half of play.

This was not the first time such controversy has occurred – nor is it likely to be the last, without new aides.

Hawk-Eye was implemented in the 2013/14 season, but it’s not only goals incidents that require assistance, as is so often highlighted on a weekly basis.

Here, we take a closer look at the technology debate.

Swarbrick’s sending off of the wrong player on Saturday was not the first time a referee has got it wrong – remember, last season, when Andre Marriner dismissed Arsenal’s Kieran Gibbs, instead of Alex Oxlade-Chamberlain, despite the protests of the players?

The speed of football is such that referees must make a decision in a split-second – and inevitably this leads to mistakes, but embarrassing incidents such as mistaken identity should not be allowed to happen, as they are so plainly avoidable.

But what would be crucial with technology is its authority. In football, the officials’ power is steadily decreasing, with players and managers constantly influencing decisions. Yet in sports such as cricket, rugby and tennis, how often does a player argue with the official over a call? Very rarely – because there’s proof!

The Premier League is rich… VERY rich. Any questions of affordability are simply ridiculous. While the lower leagues in England would undoubtedly fail to finance the technology, the Premier League certainly has no such worries.

Clubs were handed £5.14bn by BT and Sky Sports in television rights, and it’s high time that the billions being pumped into our top-flight were put towards fixing on-the-pitch shortcomings – improving the overall product, rather than just increasing player wages.

The most high-profile cases of sports using technology for key decisions, as discussed earlier, belong to rugby, tennis and cricket – and it has proved an invaluable asset to these games.

Hawk-Eye, used in tennis, is a pivotal part of the sport. The same can be said for cricket and rugby, which thrive on the drama that referred decisions bring.

Certainly, the game is frustratingly stopped when a decision is being made through video replays, yet it hasn’t deterred supporters. In fact, it makes those watching feel even more involved, and educated about what’s unfolding on the pitch/court.

The problem with football remains fear and a subsequent unwillingness to modernise, but so many other global sports have proven that technology can, and does, reap unprecedented success.

The benefits are simple – correct decisions, confirmation for supporters, and much less pressure placed on the shoulders of the officials.

As with anything new, there are drawbacks. The biggest fear is that technology would destroy the exciting pace of the Premier League.

Some could even argue that it is the very imperfection of England’s top-flight that has created its popularity. The front and back pages of the newspapers would be much less entertaining without the intense debate and controversy over a disallowed goal, a two-footed studs-first challenge going unpunished, or the wrong player being shown a red-card.

Furthermore, the FA may be reluctant to eradicate such controversy. After all, they rake in quite a lot of income from fines handed out to players and management for their comments and actions regarding key decisions. Take Jose Mourinho for example – if there were no disputed incidents, would the Special One make any memorable statements about a ‘Campaign against Chelsea’, and receive a £25,000 fine!?