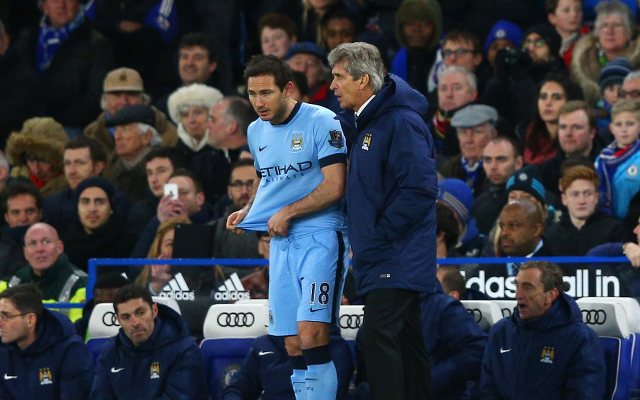 Manchester City midfielder Frank Lampard has offered his backing to manager Manuel Pellegrini and insists that the pressures of the job are not evident when working with the Chilean.

It almost feels inevitable that the club’s board will terminate Pellegrini’s contract in the summer given that they were equally ruthless in dismissing former boss Roberto Mancini.

Man City’s lack of progress in Europe could come back to haunt the former Malaga man after the Premier League champions crashed out at the last-16 stage for a second consecutive season.

However, Lampard is fully behind the boss and revealed that their is no finger-pointing going on at the club.

“Manuel is very calm. You can see his nature. He is a very experienced and can handle all pressures. He’s got a good manner and it is very important as a top manager that you never look as if the pressure is getting to you – he certainly never gives us that vibe,” he told the Manchester Evening News.

“He’s a very experienced manager, a very good manager, and I don’t think there is any finger-pointing at any individual for the recent form. It is very much a collective thing. I’ve enjoyed working under him.”

Lampard knows more than most that despite the form of the players, it is inevitable the manager will bare the brunt of consistently negative results at a top club. The former Chelsea man played under nine different managers during his time there and is well aware of the pressures on modern managers.

On current viewing, only the lack of realistic replacements could save Pellegrini from getting the sack as the likes of Pep Guardiola and Carlo Ancelotti are continuously linked with the managerial hot-seat at the Etihad Stadium.