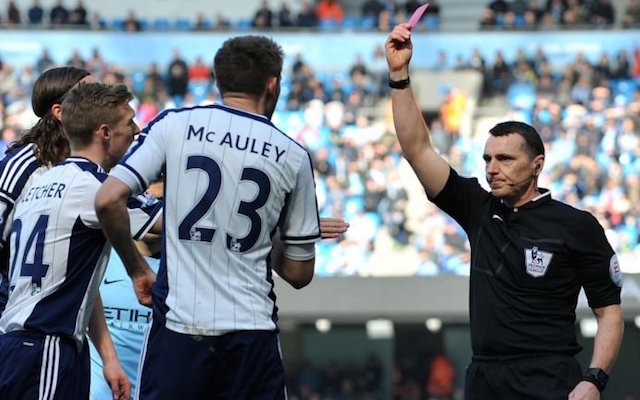 The Daily Express reports that referee Neil Swarbrick has admitted to his error which saw the wrong man sent off for a tackle on City’s Wilfried Bony just 63 seconds into the game at the Etihad.

Whilst McAuley will be vindicated, Dawson will not receive a one match ban for stopping Bony’s clear goal scoring opportunity.

“What we have to do is find a way to help referees out. A TV call back should be brought in where for 30 seconds the game could be held up while they decide if the original decision was correct or not,” said Tony Pulis on the incident in question following the game.

“Two calls allowed during the game from both sides would be sufficient and I believe would help improve the great package that the Premier League provides for everybody all over the world.

“It will eradicate the major decisions referees are getting wrong that actually affect games of football.”

Following the game, referee chief Mike Riley called for an introduction of video technology saying it would help cut out the errors made by match officials according to reports on the BBC.

Whilst he admitted it wouldn’t be a perfect solution, it would certainly help in the majority of instances.