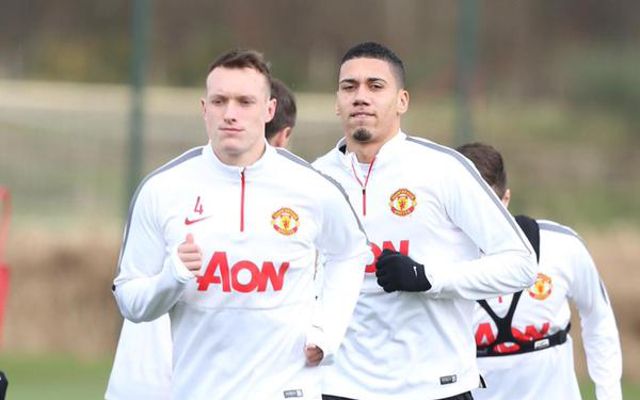 Manchester United defenders Phil Jones and Chris Smalling believe they can forge a successful centre-back partnership for both club and country.

The pair were earmarked as the long-term replacements for Nemanja Vidic and Rio Ferdinand, and in Jones’ case as a future United captain by former manager Sir Alex Ferguson.

Both have struggled to live up to such hefty expectations, and have sometimes been harshly criticised by sections of the media and fans for their supposed lack of progression since making their respective moves to Old Trafford.

But injuries and suspensions have led to the pair starting back-to-backs games for against Tottenham and Liverpool – winning both, conceding just one and in truth have rarely looked troubled.

And Jones, who cost a reported £16.5m from Blackburn Rovers in 2011, is hoping to get more playing time alongside Smalling:

“Hopefully, now we have had back-to-back games together, we can keep it going and keep playing well together. We complement each other well.” the 23-year-old told the Express.

While Smalling believes their performances in the last two games could also give England manager Roy Hodsgon a selection headache ahead of the double header against Lithuania and Italy:

“If we can produce performances like that and if we can get a good run of games that will serve us good hopefully for when we meet up with England.” the former Fulham defender said.

“Phil and I could play together for England. I was saying after the Tottenham game that it’s been a little while since we played together as centre backs – probably not since last season. We understand each other’s games.” he added.

With the national side struggling for defensive options at the moment, if Jones and Smalling are given an extended run in the United team, they could prove to be a successful partnership for years to come if recent performances are anything to go by.