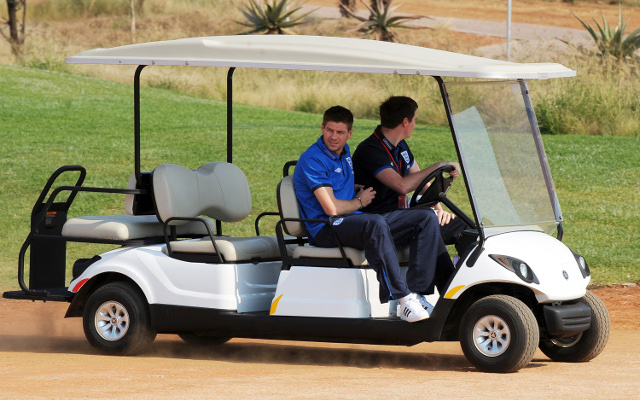 Europe’s Ryder Cup captain Darren Clarke has revealed that he may call upon Liverpool legend Steven Gerrard to speak to his team ahead of the competition next year, reports the Guardian.

Clarke, himself a Reds fan, was asked about the idea when discussing plans and preparations for next year’s Ryder Cup in Minnesota, at Hazeltine.

“There are a few people that I am thinking about. We’ll see. He [Gerrard] is a real legend. If I were to do something like that, he would be someone I would consider,” the former Open Champion said.

The 46-year-old has taken over from Paul McGinley, who secured some time for his team with former Manchester United boss Sir Alex Ferguson, ahead of last year’s event at Gleneagles.

It’s fair to say that the 34-year-old will surely have wisdom to in-part on the twelve man team about, whatever the scoreline.

If Europe are winning, then the former England captain may be able to relive his experiences from last season, when the title slipped – quite literally – from their grasp.

But if the odds are stacked in America’s favour like they were at Medinah in 2012, then he will be able to evoke memories of that famous night in Istanbul, where Liverpool came back from the dead to win the Champions League.