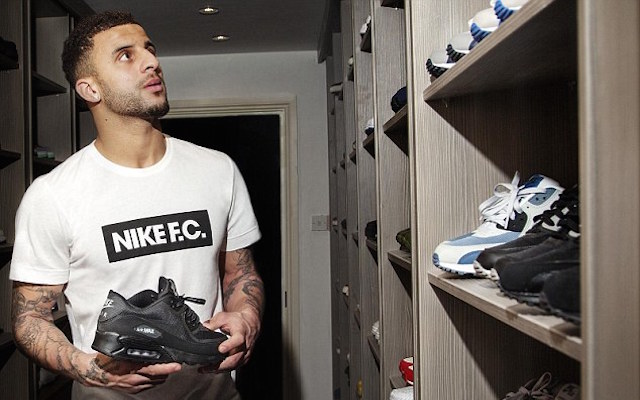 The right-back believes he’s got as many as 150 pairs of trainers and says he keeps around stacks of baby wipes in his cupboard so he has the ability to clean them at will and keep them “clean and fresh”.

“I like things to be clean,” he said, reports Daily Mail.

“I don’t like mess. My missus will probably tell you that I drive her insane with all my cleanliness.

“It’s probably why I’ve got 20 packs of baby wipes in a cupboard down there just so when I come into my sneaker closet, I can keep them clean and fresh.”

“I’ve always had a trainer fetish.”

The Spurs man was speaking following his recall to the England squad by Roy Hodgson, his first call-up since November 2013.

Walker would likely have traveled with the national side for the Brazil World Cup last year but an abdominal injury kept him out for around nine months in 2014 before returning to action in December.

And Walker says he is excited to be back in contention for a start in Friday’s European Championship 2016 qualifier against Lithuania and looking to pick up his 11th cap.

“I think obviously being injured and missing the World Cup was tough. Not being able to play for my country in Brazil was a big kick in the teeth.