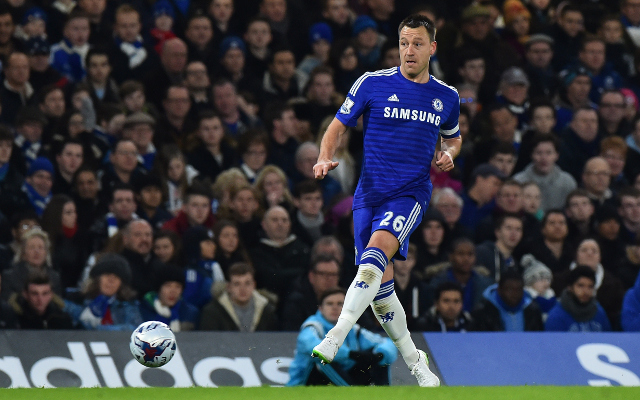 John Terry has revealed that the experienced members in the Chelsea squad are working hard to ensure that they bring the Premier League title back to Stamford Bridge next season.

The Blues captain is one of the few players in the squad alongside Petr Cech, Branislav Ivanovic, Didier Drogba, Ramires and John Obi Mikel to have tasted league success in England, but the likes of Thibaut Courtois, Felipe Luis, Diego Costa and Cesc Fabregas have all won the league title in Spain and Terry believes their experiences will prove vital to the younger players in the run-in.

“It’s immense in the dressing room, there is an awful lot of experience in there. It will serve the younger lads well, too.” the 34-year-old told The Sun.

After crashing out of the FA Cup against Bradford, then losing to Paris Saint Germain on away goals in the Champions League first knockout round, Chelsea have come under increased pressure to ensure they add the league to the Capital One Cup.

Sunday’s win against Hull City maintained a six-point lead at the top of the table for the Blues they and also have a game in hand over their nearest title challengers and the veteran defender praised the importance of the win at the KC Stadium:

“Showing the character is what we have been about for years and this season too. I’m delighted for us to come back and win the game,” he said.

“The importance of the win showed on the players’ faces and manager’s afterwards. It was an important three points going into the international break. For everyone to dwell over that for two weeks would have been massive.”

Chelsea’s next game is at home to Stoke City after the international break and a win would take them a step closer to winning their first league title since 2010.