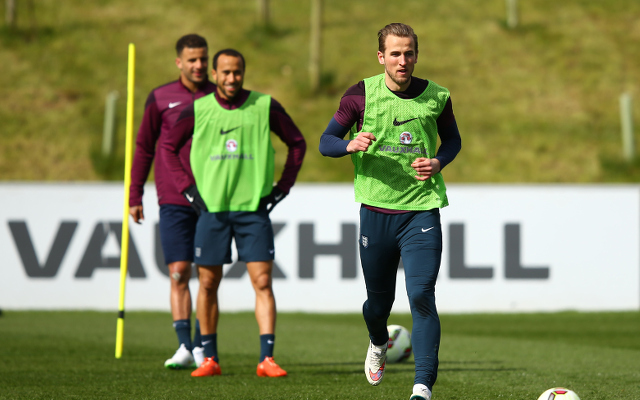 There is no doubt who the man of the moment is in the England camp, Harry Kane has been sensational for Spurs this campaign and could potentially be in the running for a number of individual gongs at the end of the season.

After receiving his first England senior call-up last week, Kane celebrated by scoring a hat-trick against Leicester City to show that he is ready to take his club form onto the continental stage.

New members of the England squad, especially those as young as the Spurs star, usually train and behave in a humble manner but Kane was offering no such mercy to his senior colleagues in training this week.

Arsenal star Theo Walcott was on the wrong end of a sharp turn from the in-form forward, slipping on his backside as Kane sent the ball in the other direction. With Gary Cahill lavishing praise on the front-man this week, Kane is certainly on a mission to show that his spell among the senior set-up will not be a brief one.

Daniel Sturridge has been ruled out of both upcoming England games, Kane will certainly be a difficult man to leave out on current evidence.

Check Kane’s skill on Walcott below: