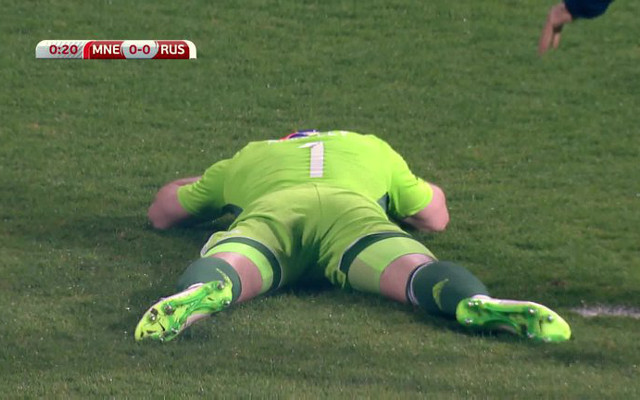 Russia’s European Championship qualifier against Montenegro was suspended for half an hour, after the away side’s goalkeeper Igor Akinfeev was struck by a flare thrown from the crowd.

The shocking incident occurred in the opening minutes of the Group G clash in Podgorica, and led to referee Deniz Aytekin ordering all the players off the pitch.

However, the 28-year-old stopper remained on the ground after being struck, and had to be taken from the field of play on a stretcher.

Once the players were back in the dressing room, the consultation between the officials and the teams began over whether the match could continue.

When the game resumed after the long delay, Akinfeev had been replaced by Yori Lodigin.

The game will be crucial to the outcome of the group, with both Russia and Montenegro tied on five points after four games. Fabio Capello’s side currently occupy third place in the group, one point and one place off an automatic qualification spot.