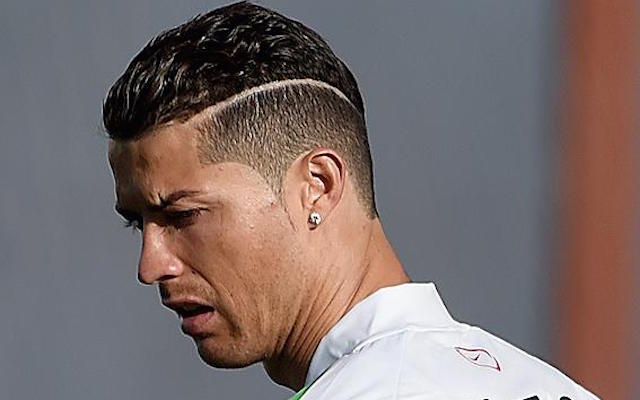 Real Madrid star Cristiano Ronaldo is sporting yet another new hair-do and will be hoping this one doesn’t cause as much of a stir as the last one.

The Portuguese debuted the new hairstyle in training for his national side ahead of their Euro 2016 qualifier with Serbia on Sunday night.

His new look sees a curved line shaved from the temple to the back of his head…rather like a player whilst they’re diving, but who’s ever accused Ronaldo of that?

Whatever it looks like, the ex-Man United winger will be hoping it doesn’t provoke as much reaction as his barber’s last attempt at creativity.

Ronaldo flaunted a zig-zag style pattern at the World Cup which the internet, of course it’d be the internet, claimed was a tribute to a young Spanish boy who Ronaldo offered to pay the brain surgery of.

Which obviously turned out to be false…gosh when has the internet ever being wrong before.

We cannot wait to see what reason the world wide web gives for this latest look from football’s most coiffed player but guarantee it’ll be just as ridiculous.