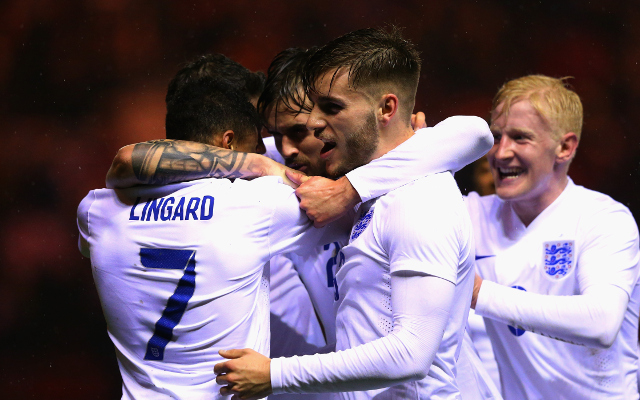 England scored twice late on to come from behind, and defeat Germany 3-2 in their under-21 friendly at the Riverside Stadium. Captain fantastic James Ward-Prowse got the winner eight minutes from time.

Germany’s starting eleven had nearly 600 more appearances in top flight football than their opponents, and the experience showed as they took an early lead through Kaiserslautern striker, Philipp Hofmann. The 22-year-old received the ball just inside the penalty area with his back to goal, before an excellent first touch allowed him to volley home.

It wasn’t until ten minutes before half-time that England looked threatening. They were denied when Barcelona’s Champions League keeper Marc-Andre ter Stegen made an unbelievable reaction save from a corner.

But the home side did pull level before the break. West Ham full-back Carl Jenkinson burst down the right-hand side, and found Derby midfielder Jesse Lingard. The Manchester United loanee calmly placed the ball into the corner past ter Stegen.

Germany re-established their lead five minutes after the interval, when Hofmann slid in at the back post to agonisingly send the ball past Watford stopper Jonathan Bond.

England were to level things up again late on in the second half. Norwich City winger Nathan Redmond was played in after an excellent run from Brentford’s Alex Pritchard. Redmond’s effort took a slight deflection, but was only ever heading for the bottom corner.

And it got better for the Three Lions, as another spell of clever build-up play on the right flank led to the ball finding Ward-Prowse just inside the area. He wrong-footed ter Stegen with an instinctive drop of the shoulder, before calmly slotting home for his fifth international goal.

There was still for Burnley striker Danny Ings to cap off a quiet night with an awful miss however. The Liverpool target had the goal at his mercy, but his tame attempt went straight to the German keeper. Luckily, it had no impact on the outcome.