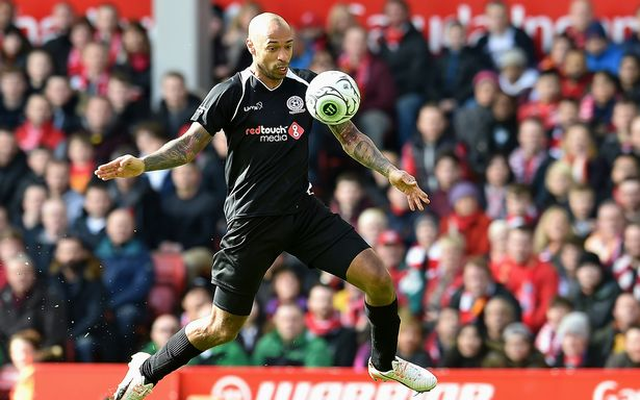 Arsenal legend Thierry Henry offered former Liverpool man Ryan Babel some tactical advice after the Dutch forward missed an opportunity to score following a sensational piece of skill from Henry to set him up.

As they lined up alongside each other for Team Gerrard in the All-Star charity game at Anfield on Sunday, Babel received some stick on social media for missing a chance after being presented a wonderful opportunity by Henry.

However, as always, the Premier League icon was a step ahead of everyone, seeming to see aspects of the game many don’t. He chose to point out that Babel should’ve squared the ball to on-loan Liverpool teenager Joao Carlos Teixeira at the back post for a simple tap-in rather than shooting himself.

SEE MORE:
Arsenal FC news
Why it’s time to offload this Arsenal star to make way for this huge summer signing who could be their ‘Next Thierry Henry’
(Image) Arsenal legend Thierry Henry poses with Oscar winning actor Kevin Spacey

Analysing the game has now become Henry’s profession following his punditry work for Sky, but it seems as though he still wants to see the game played exactly the way he did.

The Frenchman became universally known as an unselfish striker – despite his incredible personal goalscoring record – and the fact that he still holds the assist record in Premier League history (via Premier League) shows he is fitting of that title.

Here is the chance Henry fashioned for Babel in Steven Gerrard’s charity match: