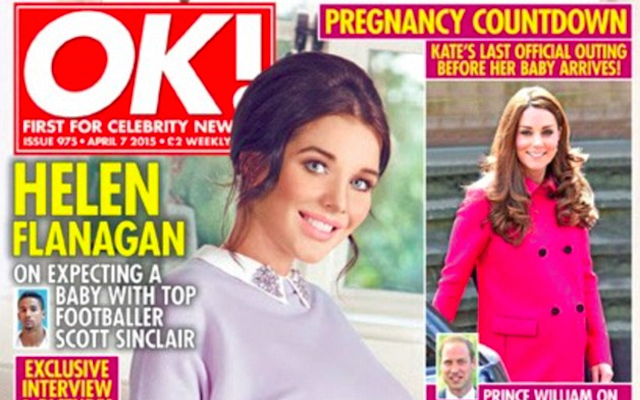 Flanagan and the on-loan Man City star are expecting their first child later this year with the 24-year-old telling OK magazine that the pregnancy has brought the two closer together and that nuptials could soon be on the cards.

It’s not exactly been the calmest few months for Flanagan who has had to battle terrible morning sickness whilst living out of a hotel with Sinclair after his January loan-deal from Man City to Aston Villa.

“We’ll definitely get married at some point. Scott knows what type of ring I want – one with a huge rock on it,” said Flanagan, reports OK.

“Since I’ve been pregnant we’ve been really happy – I think it’s because you share that bond.”

“I don’t feel stressed. There’s nothing I can do. I’ve always dreamed of making my baby’s nursery. Hopefully we’ll get a house in time.

“I’ve been the happiest I’ve ever been while pregnant.”

And the former Corrie Star believes she is definitely having a boy after visiting a psychic when she was four months pregnant who claimed she would definitely be having a son.

Both agreed to keep the sex of the baby secret until the child is born but perhaps the two could be welcoming the next Scott Sinclair into the world later this year.