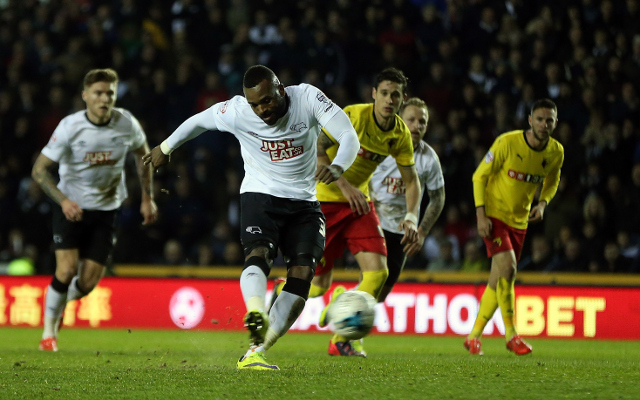 Things were going Watford’s way in this Championship clash, with both sides vying for a promotion spot come the end of the season. A rash challenge from Marco Motta put them in trouble however, and Darrent Bent smashed home from the spot after the Italian was given his marching orders.

SEE MORE:
Derby County Transfer News
Five reasons neutrals should hope Chelsea mess up and Arsenal win the league
Why the Premier League could learn a thing or two from the Championship

The visitors opened the scoring after some shocking defending, Matej Vydra pouncing on a loose ball to make it 1-0. Derby had nobody to blame but themselves, and could only bow their heads in shame after losing the ball in a dangerous area and failing to clear the ball when given the chance.

Watford looked in control for large parts of the first half, but Derby were creating half chances here and there. Bent missed a gilt edged opportunity just before the break, with the former Premier League striker failing to control the ball after a great pass put him through on goal.

There was still time for him to make up for it before the half-time whistle however, and when Motta foolishly went to ground in the area, Bent lashed it in.

It was certainly a penalty, but it arguably shouldn’t have been a red card. Johnny Russel’s touch was poor right before Motta brought him down, so there was no chance he would have got a shot off on goal.