Chelsea are now just five wins and a draw from clinching a first Premier League title since 2010 as they extended their lead at the top of the table with a hard fought 2-1 win against Stoke City on Saturday evening.

Asmir Begovic denied Loic Remy early on with a good reaction save and it took until the 39th minute for the hosts to find a breakthrough as Eden Hazard converted from the 12 yards with a coolly taken penalty to make it 18 from 18 from the spot in the league after Cesc Fabregas had been fouled.

But just a minute before the interval Charlie Adam equalised for the Potters with a stunning long range effort, which will surely go down as one of the goals of the season, if not Premier League history, as the former Liverpool man caught Thibaut Courtois off his line.

The hosts suffered another set-back soon after as half-time substitute Diego Costa lasted for just 11 minutes as before he pulled up with what looked to be a recurrence of a hamstring injury that has plagued him all season. 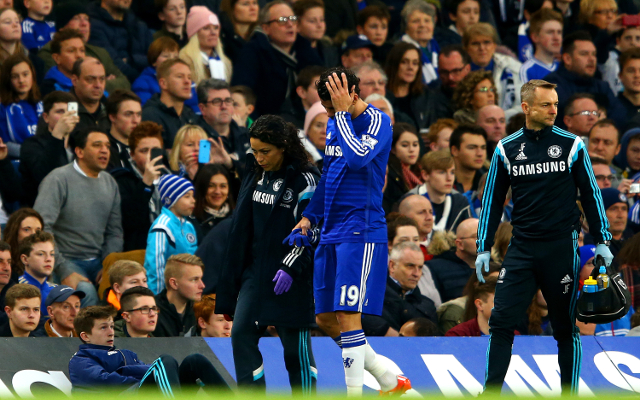 But Loic Remy, who started ahead of the Spaniard, was on hand to restore Chelsea’s lead just after the hour mark with a simple tap-in as man-of-the-match Hazard had squared for him.

That proved to be the winner as Jose Mourinho’s side responded to victories earlier in the day by Arsenal and Manchester United to maintain their grip on the title.

Next up for the Blues is a West London derby against relegation threatened Queens Park Rangers at Loftus Road on Sunday week.