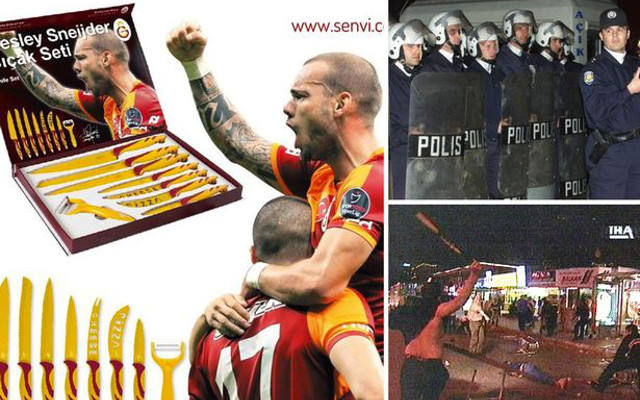 Galatasaray midfielder Wesley Sneijder has tweeted an apology for earlier promoting a club branded knife set, endorsed by him, via his Twitter account on the anniversary of the deaths of two Leeds United fans, stabbed in Istanbul.

Leeds United are marking 15 years since the deaths of Christopher Loftus and Kevin Speight, who were stabbed, and died, the night before their team’s UEFA Cup semi-final against Galatasaray.

There will be a minute’s silence at Elland Road ahead of the Championship game against Blackburn Rovers. Fans were enraged on Saturday morning following a tweet from Netherlands international Wesley Sneijder, including a picture of a Galatasaray branded knife set carrying his image, which said, “Finally, my @GalatasarySK knife set is now available and can be delivered everywhere.”

Unsurprisingly Sneijder was soon on the wrong end of angry responses from football fans, before the Dutchman deleted the tweet and claimed he was unaware of the anniversary, before apologising. He posted, “@Leedsu1Ross Very sorry. I didn’t know this and deleted our promotion for the merchandise kitchen item. #Respect.”

Ali Umit Demur was jailed for 15 years following the deaths of Loftus and Speight, with four other men imprisoned for their parts in the attack.

@Leedsu1Ross Very sorry. I didn’t know this and deleted our promotion for the merchandise kitchen item. #Respect