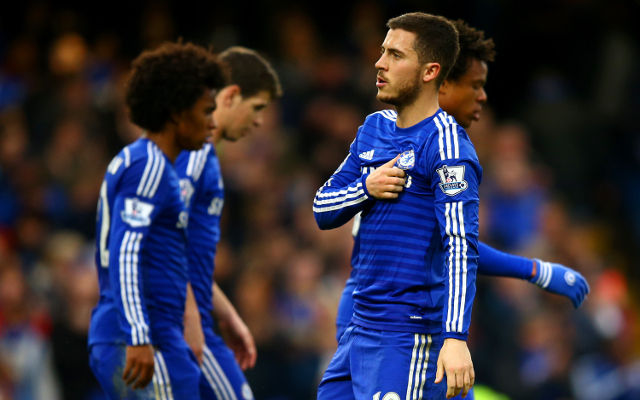 Eden Hazard is confident that his Chelsea side will hold off the challenge from both Manchester clubs and Arsenal to claim a first Premier League crown since 2010, talkSport reports.

As the season approaches its finale, the West London outfit are currently seven points clear at the top of the table and have a game in hand which is against bottom side Leicester City at the end of month.

Hazard, played a starring role for the Blues as they beat Stoke City 2-1 on Saturday evening scoring the opener from the spot before laying the ball on a plate for Loic Remy to score the winner at Stamford Bridge, and the Belgian international is relaxed about the situation and remains positive that they will finish the job:

Speaking after the game to Chelsea TV (via talkSport) he said: “We are confident. We are first in the league and we take game after game.”

“We have the title in our hands. We want to bring the trophy to Stamford Bridge.” he added.

Chelsea require five wins and a draw from their remaining eight games to be crowned champions and face a tricky looking derby against Queens Park Rangers at Loftus Road next week, before back-to-back fixtures against Manchester United and Arsenal.