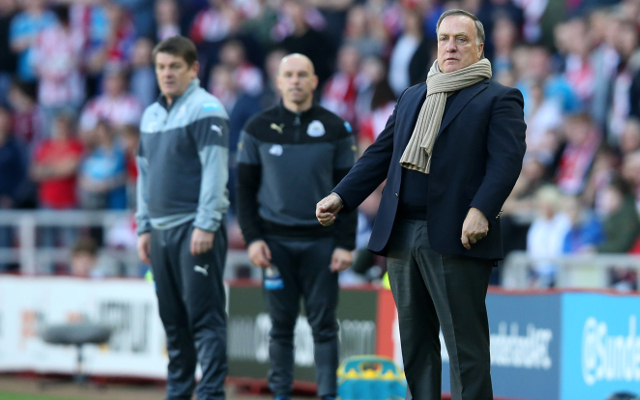 Sunderland eased their relegation concerns after Jermain Defoe’s stunning volley helped guide the Black Cats to their first win under Dick Advocaat, and their fifth consecutive victory against Newcastle.

Before the Tyne-Wear derby began, the home side knew that a defeat by more than two goals to John Carver’s men would send them into the bottom three, after Burnley battled to a goalless draw with Tottenham earlier in the day.

And in a frenetic, and at times untidy, start, it was the Magpies who had a decent shout for a penalty turned down by referee Mike Dean, when Ayoze Perez was felled by Santiago Vergini.

Former Sunderland midfielder, Jack Colback was then almost hit by a golf ball thrown from the slightly hostile crowd, as he attempted to take a throw in. Luckily, the incident appeared to be the only flashpoint involving the crowd during the game.

On the stroke of half-time, it was Advocaat’s side that took the lead. Jermain Defoe hit a wonderful volley from the edge of the area, that gave Newcastle keeper Tim Krul absolutely no chance. The former England man was clearly emotional as he went off for the interval.

The second half was much like the first – scrappy. The referee was forced to award seven yellow cards during the game, five of which were for the home side. However, there were no overly malicious challenges, and most of the cautions were for petty incidents that you’d expect to see in a derby clash.

Perez did have a chance in the last five minutes to level the game, but he blazed his volley over from eight yards out.

With the win, Sunderland leapfrog Aston Villa and Hull to move up to fifteenth, but remain just three points above the relegation zone. Newcastle remain thirteenth.